Black Tipped (outside the UK known as Silver Shaded) British Shorthair cats are described as the fairy cat of the British. Their expressive emerald green eyes, natural black make up, mysterious smile and black palm pads in contrast to the sparkling snow-white fur, makes this breed the most impresive and enchanting among the feline nobility. Their soft, dense and crisp coat feels like picking up a handful of newly fallen snow. Because of their small numbers this cats are very rare and hard to breed, wich invariably causes delight and admiration.

Pedigree
It is interesting, that all of the first Tipped/Shaded kittens of the Peerles cattery were registered with the word  ice in their names. Among them were the fameous Icebreaker and Icefloe (both Champions) as well as other wellknown Brits like Icestar, Iceflower, Icicle and of course Iceberg. However, this naming policy had to be abandoned in 1976. The first Grand Champion in 1981, became Winder`s Peerless Silver Jule (GCCF SR/NS 39108 - BRI ns 12), a Black Tipped/Shaded male, bred out of Icebreaker and Icicle. It is clear that many Tipped/Shaded British Shorthair`s of today, all around the world, trace back their ancestry from Peerles lines, invented in Britain (Dickson 1970).


APPEARANCE
The appearance of Black Tipped/Silver Shaded British cats should be the same as of any other representative the breed.  The British Shorthairs are medium-sized to large cats (although the Silver Shaded and Chinchilla British Shorthairs are generally smaller in size and lighter in weight when compared to other British varieties). They should have a deep chest, broad shoulders and a short, muscular back, which gives them a chunky appearance often called cobby.  The legs are short and thick, with strong, round paws. The tick tail is short to medium in length, with rounded tip (Verhoef 2007, 50).

As with all British cats the head should be round and massive, with full jowls, broad skull and full chubby cheeks set on a short, thick, muscular neck. The ears are small in size, round, board at the base and set wide apart. The eyes are large and round; the color varies, depending on the coat color. In the Black Tipped/Silver Shaded cats the eyes are green or blue-green. The skin around the eyes, lips and nose should be outlined in the same colour as the tipping. In Black Tipped/Shaded cats it looks as if cat is wearing eyeliner. The nose is short, broad and strait, with a slight break (but not too pronounced). The nose leather should be brick red (Griss 1997). There should be a gentle curve from the nose into the round forehead. The chin is strong and well-developed. Adult males have a larger, more massive head than females and have the typical tomcat jowls (Verhoef 2007, 51).

British cats have a dense, short coat, that should feel slightly crisp and resilient. Because of its thickness and density it does not lie flat, but stands out very slightly from the body. When touched, the coat feels like a plush rug and should tingle the hands. It is a pleasure to run your fingers through it. Some British Shorthairs have coats that are to wooly, too long or too soft. These cats are not suitable for showing (Verhoef 2007, 51).

Coat colouring should be even and restricted to the tips of the hairs to give a sparkling effect. The evenness of the tipping is more important then the amount or heaviness of the tipping. The tipping should be present on the head, ears, face, along the body, down the flanks and upper surface of the tail, with little tipping extending down the legs. The chin, chest, belly, inner legs and the underside of the tail should be very pale silver as should the undercoat, usually appearing white. The pawpeds should match the colour of the tipping (Griss, 1997). So the paw peds of the Black Tipped/Shaded cats should be black. 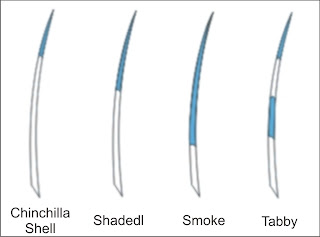 The silver undercoat is caused by a gene known as an inhibitor (I), which inhibits the formation of pigment at the base of the hair, in other words from the root. This means that each individual hair is partially without pigment at the root end. To the human eye this appears silver. The rest of the hair has normal pigmentation and can therefore be black, red or another color. A distinction is drawn between self-colored cats and tabbies with the silver undercoat. When the inhibitor gene is present in a self-colored cat, this is known as Smoke. At shows, judges like to see the pigment covering about half of each individual hair. In the case of tabbies, various names are used, depending on the amount of pigment in the coat and the color of the pigment.

In a Shaded cats, approximately one third of each individual hair contains pigment, and in Chinchillas (Shell cats) the proportion is about one-eight. These names are only used for cats with black pigment or colors derived from it, such as blue, chocolate and lilac. If the pigment is red or cream, the cat is known as Cameo (Verhoef 2007, 55).

The amount of pigment in the coat can vary from one kitten to another in a litter. A darker cat, with tabby markings on some parts of its coat is not referred to as a Smoke since this name is reserved for self colored cats. Instead it is known as a Ticked Tabby.

Ticked Tabbies are closely related to the Shaded shorthairs. Both cats lack stripes on the body, but a Ticked Tabby has stripes on at least 2 of the following: head, neck, legs, or tail. As in Shaded, the pattern is defined by overall appearance of the cat, not by the tipping of the hair. The hairs may be tipped or multiply banded. Generally, a Ticked Tabby appears darker than Shaded Silver for one of three reasons: the hair banding frequency is even, the hair banding frequency is short giving the hairs multiple bands, or the color travels far down the hair shaft (Johnson 1999-2002).

Some Chinchilla and Shaded Silver cats that are not purebred for the inhibitor factor can produce what are known as Golden offspring. These are actually Black Tabby cats whose pattern, as in case of the Silver Tabby, has been bred out by selection (Verhoef 2007, 55).

Here is a theoretical chart of how golden kittens can be derrived from Chinchilla or Black Tipped/Silver Shaded parents:

British Black Tipped/Silver Shaded mature very slowly. Thy grow up to 4 years and reach full development at 5 years old (Botambekova 2010). They look great all their lives, and suprisingly change their appearance in accordance to the season, temperature and environment. Their life expectancy is up to 18-20 years.

CARE
British shorthair cats are also very easy to care for. They do not need much of the grooming. A hand-grooming (with moist hands) will remove most of the old hairs (Sayer and Loxton 1999, 33) or a weekly session with a brush is enough to keep the coat in good condition. It is not advicable to use deshedding tools (like Furminator) on them, because it can thin their coats.

Ears can be cleaned with a special ear cleaner for cats, which is gently massaged into the ear and then dabed off with a tissue. It is also very important to check the gums and teeth, and if needed to clean them regularly with a toothbrush or gauze, using meat-flavored cat toothpaste, that cats usually love.

If you want to show your British Shorthair, you may also need to give it a bath. Do not use oily shampoos or balms, that might flatten the coat. According to breed standard, British Shorthairs should have small, round ears, so most exhibitors carefully pluck out the hairs that grow beyond the edges of the ears, or trim them off.

Sharp points off the claws should be regulary cut of with good nail clippers to prevent them from growing into the paw (Verhoef 2007, 50).

TEMPERAMENT
While reading different literature about the breed temperament and observing my own cats at the same time, I have realized that tippies or Silver Shaded British cats really do have their own special character, which is not presented in books. As Sue Cummins (Bedazzle prefix) says on her website, they are very intelligent, loyal and loving cats, with a strong tendency to become a one person cat. They are great talkers, not noisly, but twitting their views. This cats are not lap cats, since they preferr to sit with you, rather than on you. They are alert and quizzical and enjoy following you around the house. The males, in particular, are extremely people-oriented, usually downright mushy (Stephens 1989, 45). Silver Shaded/Tipped British Shorthair cats are very clean. They are fastidious in their habits, keeping their coats groomed to perfection (Cummins 2008).

British Shorthair usually go on well with other cats and similarly do well with dogs. This cats are not agressive and do not lose their temper easely, therefore they are very good also with children. They make ideal pets for less active people as well as for busy households, while their great adaptability means that they can live equally happily in the country house or in a top floor flat (Verhoef 2007, 48). It is no wonder that the representatives of this breed are incredibly tempting and that the number of their fans is growing day by day, all ower the world.

Posted by Silverbuttons cattery at 23:07

About Us/ O Nas

Silverbuttons cattery
SI*SILVERBUTTONS is a TICA and FIFe registered cattery of Beautiful Chinchilla, Silver and Golden Shaded British Shorthair cats. Our babies are well socialized, litter trained, vaccinated, microchipped, very friendly and extremely sweet little chubbys. Together with their parents they live with us in our home with plenty of love, care and devotion. They have regular veterinary check ups and are PKD, HCM, FIV and FeLV negative. We are located in a beautiful city of Ljubljana (Slovenia). You are welcome to visit us, our city and our cats anytime, but till then enjoy our blog. :)

About the Breed/ O pasmi 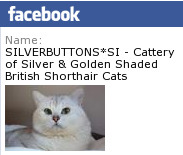